Conor’s foray into booster seat riding came to an unceremonious ending last night when he opened the car door. ON THE FREEWAY. Yep, that’s right. Apparently he wanted to begin his future as a stunt man.

I thought he had lowered the window a little for air until I saw the door sensor on the dashboard and looked behind me to see that, SWEET JESUS, the door was open! I had a mild cardiac arrest and an out of body experience while pulling off the freeway and onto the side of the road.

Ever lose your cool as a parent and find yourself launching into a nonsensical tirade, filled with things you would never actually say if you were not scared out of your ever-loving mind? Things that totally undermine your position as a sane and responsible parental figure? That’s what happened in this case.

My moment of parental genius went a little something like this:

DON’T TOUCH THE DOOR!!!!!!! NOBODY TOUCH THE DOOR!!!!!! DON’T PUT YOUR HAND ANYWHERE NEAR IT!!!! YOU DO NOT EVER EVER EVER TOUCH THE DOOR HANDLE, DO YOU UNDERSTAND?????? WE WERE ON THE FREEWAY!!! [At this point I think Conor understood that touching the door makes Mommy yell and repeat things. He might have also been wondering how he would possibly exit the vehicle if he wasn’t allowed to touch the door. I did successfully establish our location, however, which is helpful.]

If you EVER do that again, I will tan your hide. [I did actually use this phrase. Apparently it was a good time to introduce the kids to cowboy terminology.] You will find out what “spanking” means, young man! [What, because I would define the word? Or would I (shudder) make him use the dictionary by himself?]

Do you know how dangerous that is??? [Obviously not or he wouldn’t have done it, so I decided to clarify, using concepts beyond his grasp.]

You could have been killed! If I’d had to swerve, or stop suddenly or been hit by another car, you would’ve fallen out and… [dramatic pause while I searched for a slightly less graphic way to say “been squashed under the wheels of a bus.”] been killed! Killed! [redundancy is key for emphasis.] Do you understand me, Conor? Killed!

You are going back in your baby seat until you are old enough to understand that sitting in a booster seat comes with responsibility. [He was probably wondering if responsibility was something akin to chicken nuggets and if it came with a side of french fries.] You have to sit up in your seat with your back against the thing. NOT leaning forward. NOT sticking your hands out the window. And NOT touching the door handle! [Sometimes when I’m very upset and flustered I lose words and can’t finish ideas, so it’s best to shut up and settle into a brooding silence until I’ve calmed down, which I did at this point.]

Conor was so impressed with my bad@ass mama lecture that he promptly lost consciousness from fear. Or possibly awe. 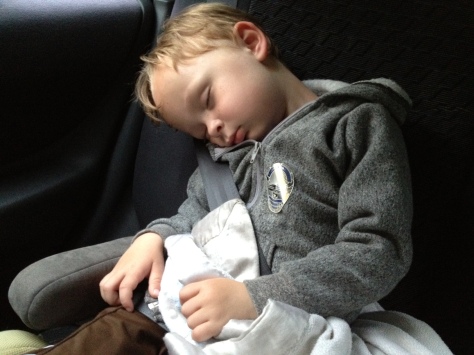 I took this picture when we were parked safely in our driveway.

Note: Let me preempt the onslaught of bad mother, hate mail by saying that, though Conor does meet the minimum height and weight requirements for booster seats in the state of California, I fully agree that he is not ready to be in one. I jumped the gun and overestimated his maturity. Also, I had activated our child safety door lock on Conor’s side to thwart any high-speed escape attempts, but the switches are on the individual doors and someone, probably Stuntman Junior himself, must have deactivated it.

I put him back in his car seat today. And hermetically sealed his door. And shot him with a horse tranquilizer. Because I’m a good mother.

12 thoughts on “On The Road With Kid Danger”