I read this post over at The Book Of Alice about the sweet way Alice (a.k.a the Kidling) was expressing her love for her Mama. In the comment section, Christine (a.k.a the Mama) stated, “I don’t believe there is an age limit for expressing your love creatively” which struck a chord with me because, as a parent, there is nothing sweeter than when your children shower you with buckets of genuine affection and nothing sadder than when they enter into the nuclear winter of affection known as adolescence.

As an experiment, I called my eight year old, who teeters on the precipice of Tweendom, to me, gave her a big hug and told her “I love you to the dirt and bath again and around the soap and towel again.”

To which she replied, “I love you to China and outer space.”

And then she started pretending to choke from my suffocating hug.

But still, she loves me to outer space, which is pretty infinite, especially since NASA’s budget has been gutted and it’s harder to get up there and see exactly how much square footage we’re talking about. And China is where all of the toys are made so that’s a pretty choice location too, unless you are protesting human rights or something, but I don’t think she’s thinking about the political aspects of any country yet, so it probably wasn’t a statement about the restrictive nature of my parenting. Probably.

In any case, I’m happy to report that my eight year old hasn’t reached an age limit for expressing her love creatively, though she may be approaching an adolescent hiatus. I still have a couple of years of outer space/China love to enjoy. And believe me, I’m squeezing all of the blood I can from that love-turnip. 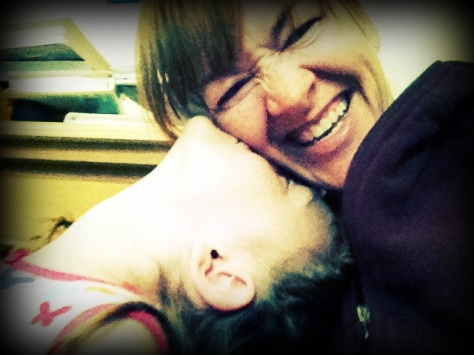 It looks like Riley is kissing me but actually she’s grunting, “just take the picture,” which is why I’m having a fit of giggles.