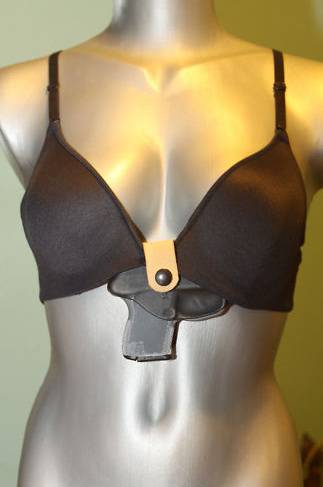 I gots to get me one of these!

Sure I don’t really need to carry a concealed weapon. I don’t move in dangerous circles, unless you count my husband and he has all but promised not to hold me at gun point, I hardly ever find myself cruising skid row to pick up crack-hoes anymore, and if someone threatened me I could always throw Conor at them and let his supersonic scream paralyze them long enough for me to kick them in the shins, take my son back (because I’m not a bad mother) and make a run for it.

Hubs has suggested that I carry a gun when I go trail running, for use against mountain lions and nature-loving lunatics, but I get so sweaty out there that I’d probably whip out the gun only to have it slide right through my grasp and into the paws/hands of the mountain lion/nature-loving lunatic. And no one wants to face an armed mountain lion (nature-loving lunatics tend to already be armed, so it’s a moot point). I’ve already ignored Hubs’s suggestion to carry water and a phone out on the trail, so I’d hate to break my record of rebellion anyway.

And chances are that I’d accidentally blow my nipple right off into my armpit, which is not the sexiest place to have a nipple. I read that in Maxim Magazine. That rule might not apply to 43-year old mothers of two and the readers of Maxim probably don’t care where I keep my nipples because I haven’t been cast in a Transformers movie or dated Jason Statham. 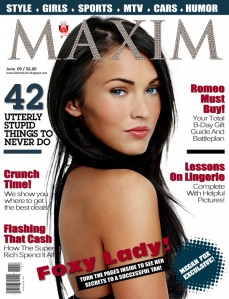 Regardless of lack of need and inherent threat to breast tissue, I find myself wanting one because…and this is really the most important reason of all…

How bad@ss would it be to pull a gun out of your bra? I mean really?

Gripping that flop-sweat covered semi-automatic in my hand with my shirt askew and the holster sticking out at an odd angle like a third breast, I would look mad sexy! Maybe not to the nipple-conscious readers of Maxim Magazine, but I’m pretty sure that Hubs would threaten me with imminent harm at least once a day just so he could see me draw my weapon.

In this house nothing has more sex appeal than a woman with a loaded weapon in her Wonder bra. Even if she’s a 43-year old mother of two with a nipple in her armpit.

Gotye – Somebody That I Used To Know (feat. Kimbra) – official video – YouTube.

We heard this song in the car on a family road trip. We were all in a fantastic mood but this song made my daughter, Riley, sob and then launched her into a depression that lasted 90 miles over the lyrics “I don’t even need your love.”  Hubs, who doesn’t understand moody, Indie Pop love-gone-wrong songs anyway, was completely baffled by her reaction. Luckily, with my extensive adolescent experience in crying to 80’s love songs I was able to jump in and navigate my sensitive girl’s emotions. Since then every time she brings the song up my 4-year-old son, Conor, softly sings the back up lyrics “somebody. Somebody that I used to know” on a loop as if to illustrate her emotional pain.

In preparation for the kids’ teen years I’m going to build Hubs a sound proof room, stocked with AC/DC and a punching bag, so that he can escape all of the emoting in the rest of the house. We’re a sensitive bunch.