I think I have a nose for investigative journalism. Some stories just jump right off the page and demand that I do some research. For instance, this morning I saw a story titled Cows Eating Candy During The Drought. I had visions of cows buying Snickers bars and Big Gulps down at the local 7-Eleven and cows trick or treating while dressed up as princesses and ninjas. The investigative journalist in me had to check it out. 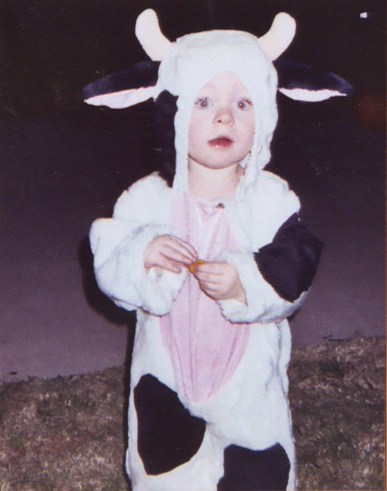 See, trick or treating cows are adorable. By the way, she’s holding a fake severed finger.

I was somewhat disappointed to find no mention of trick or treating cows in the article. However, the story was still interesting.

Apparently the drought is sending corn prices off the charts, which is making it very expensive for ranchers to feed their livestock because cows are notoriously big eaters. That’s why they’re called “cows”. For the record, I’m not judging them for their appetite nor would I advocate making them buy two tickets on an airplane. Not every animal can be built like a cheetah, so let’s be a little more tolerant here, people. Besides, who wants to sit next to a cheetah on an airplane? It would eat your head. We need to be logical about this.

Anyway, according to the article, Joseph Watson over at Mayfield’s United Livestock Commodities couldn’t afford to feed his cattle corn anymore, so earlier this year, he started feeding them second-hand candy.

(Enrollment in animal dentistry is probably skyrocketing as I type.)

The packaged candy comes from various companies at a discounted rate because it is not fit for store shelves. I didn’t know that candy went bad and judging from the Halloween candy I got when I was younger, neither did any of the people in my neighborhood. I wish some thoughtful rancher had been around back then to take the stale chocolate and petrified Dum Dums off the hands of my neighbors, even if it meant that I would eat it later covered in A1 Steak Sauce at our local Sizzler. 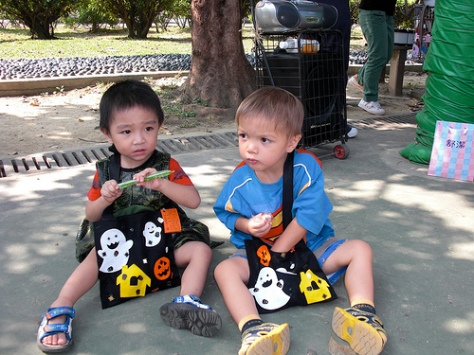 “Old Lady Simmons gave me some junky lollipops again.” “Me too. I say we egg her house later.” (image via flickr & Martin Lindstrom)

Watson mixes the candy with an ethanol byproduct and a mineral nutrient. He says the cows have not shown any health problems from eating the candy, and are gaining weight as they should, which makes sense. I gain weight when I eat a steady supply of candy. I also find myself a little irritable. I wonder if Watson is having problems with grumpy cows. I wonder if his ranch looks like a school playground the day after Halloween.

I was a little concerned that if the cows are completely sedentary, eating candy and drinking Big Gulp’s full of ethanol byproducts, they aren’t living a healthy lifestyle. That’s no way to live. Unless you’re a computer programmer.

This angle of the story demanded further investigation.

I contacted my confidential source, Lindsay Lohan (and by “confidential” I mean completely fabricated), who seems to exist just fine on candy and ethanol. She suggested that the ranchers take the cows clubbing for exercise. I told her that the idea was ridiculous. Obviously the cows don’t have anything cute to wear. They’d never get into any quality Los Angeles nightclubs. Then Lindsay and I got in a fist fight and her parole officer had to break it up.

Don’t worry, I gave her some candy and ethanol and we’re solid again. (image via dreamstime)

To be honest, I didn’t completely understand what an ethanol byproduct was. It sounded like something I might have produced after a night of collegiate drinking, but surely no one would feed that to cows.

In order to speak intelligently about it I did what any knowledgeable journalist would do and googled “ethanol byproduct”. There I discovered an article filled with somebody else’s investigative journalism that talked about how recent research at Kansas State University has found that cattle fed distiller’s grain have an increased prevalence of E. coli in their hindgut or, as I like to put it, poisonous junk in their trunk. In fact, the prevalence of E. coli was about twice as high in cattle fed distiller’s grain compared with those cattle that were on a diet lacking the ethanol byproduct.

They don’t know exactly why this is but they’re looking to find out why and then prevent it from happening because the relationship between cattle ranchers and ethanol producers is mutually beneficial. Distiller’s grain is a cheap food source and ethanol producers need an added source of income in case the world suddenly stops drinking heavily or Kentucky sinks into the ocean.

Don’t panic. We’re not getting rid of any state that gave us Johnny Depp. (image via dreamstime)

Now if you will excuse me, I’m going to go perfect my new cocktail. I’m mixing whiskey, old Halloween candy and a Flintstone’s chewable and calling it a Cattle Feed Martini. I’m on my second one and I’m about ready to throw myself on a grill right now.

My mom cooked a lot of tv dinners and things that required a can opener or an addition of water. I don’t remember her cooking much else. She made bread from scratch that doubled as a paper weight, a barley/green chili casserole that we all inexplicably loved and the best toast ever (the secret was pre-buttering, which inevitably caused a toaster fire in our ancient, second-hand toaster and so our toaster spent a lot of time on the back steps, smoking in the rain, much like my father but minus his cocktail.) Mom never sat down to eat with us. When I was about five years old she declared that she’d never make another Thanksgiving dinner. She kept her word.

After her death, my father carried the torch of prepared food dedication, keeping me on a steady diet of Hamburger Helper, Soup Starter, Van de Camp’s frozen enchiladas and Jello salads (he added all four food groups and any condiments available in our fridge to make it a complete meal.)

Looks and tastes like an alien (image via chloeofthemountain)

Maybe because of this, I developed a strong desire in my twenties to learn to cook from scratch for the express purpose of one day becoming one of those mothers, about whose cooking her children brag. I loved to cook and I pursued it with a singular purpose. I enjoyed pleasing friends with my meals, but always, in the back of my mind, was the goal of one day pleasing my children. Food is love.

Of course this was before I actually gave birth and discovered the futility of my plan. My two lovely progeny only approve of two spices, salt and sugar, will not eat any of the same foods with the exception of chocolate, generally distrust most vegetables and want all of their ingredients to have at least an inch of distance from any other food source. If every meal came in a fast food bag they would live their short, unhealthy lives in pure ecstasy.

A couple of nights ago I was feeling uninspired but felt obligated to put something on the table. I grilled some chicken, made some Spanish rice, tossed it together with some beans and fresh salsa and called it a Mexican rice bowl. At Hubs’s prompting everyone offered up a feeble “Thanks Mom. It looks delicious.” and started picking over their plates.

Then Hubs innocently asked, “Is there paper in this?”

Before I could answer, Conor asked to be excused and Riley spit out her mouthful, exclaiming, “This is disgusting. I don’t even care if I get dessert.”

Realizing that he had unintentionally started the avalanche of dinner protests, Hubs tried to back pedal.  “I mean the paper doesn’t taste bad or anything. I think I’m just tired and a little full right now.”

In my defense, let me just say that I don’t cook with processed tree pulp. I once made a sandwich with the paper that separates the cheese slices but I was pregnant and disoriented so you can’t count that. The paper-like substance they detected was brown rice. I love whole grains but the rest of my crew prefer their grains fully bleached and processed, which is coincidentally also how they prefer their paper.

That was the nail in the culinary coffin for me. I’m on a cooking boycott until further notice. If my mom were here I would salute her with a loaf of her 15 pound bread in solidarity.

I will continue to make sure that the kids get a fairly balanced diet throughout the day and we’ll still gather at the dinner table in the evenings to talk about our days over some sort of food–perhaps some pear and cheese or carrots and pretzels. But for now I’m not cooking any evening meals.

My children are already flying the victory flag.

Brown boxes are cool. Brown rice is not.

Has anybody else thrown in the dinner time towel? Or figured out a way to avoid it? Did it involve hiring a personal cook or a child hypnotist?