Hubs got a new work tool. He gets the best stuff.

It looks like a big ole mess of straps and buckles. Something that you would attach to a duffel bag. In fact, that’s what I thought it was until I looked at the pamphlet and discovered that the innocuous pile I’d overlooked was actually an Injured Personnel Carrier or the Human Backpack to its close friends.

Squee! Look what it does!

Bad@ss, right? No, those aren’t conjoined twins. That guy on the back is gravely injured. Or asleep. No, it’s definitely the first one. And the guy in front is going to carry him to safety. Observe how the carrier has his hands free to fire his impressive weapon. That’s important because when people dislike you enough to shoot at you, they’re probably not going to stop just because your friend is hurt. This was designed in conjunction with the Israeli Army Special Forces and they don’t mess around.

I became giddy and hounded Hubs until he agreed to take me outside and use me as his Injured Personnel. And take pictures.

Hubs is such a good sport. It’s hard to be a serious first responder when your victim is moaning,

And then giggling whenever you try to hook the straps between her legs. 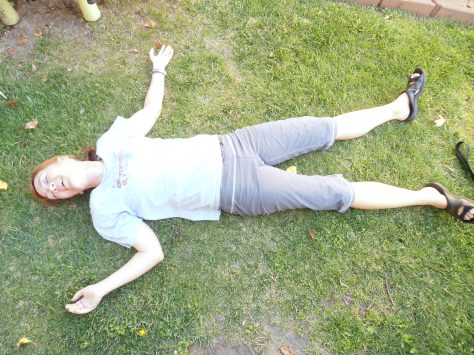 Will someone help this poor woman? Or at the very least get her a cute outfit and shoes?

A cute husband works too. We look good strapped together.

Look, I’m better already. Now Hubs can take me to the hospital or just to the mall. Shoot, if I break a toe again on another date night Hubs can just haul me off to dinner.

The uses for this contraption are innumerable. This baby isn’t just limited to close-quarters urban combat.

Have a friend who always gets drunk at parties or a girlfriend who can’t handle her liquor? Just pop one of these in your bag. At the end of the night you can take them home like the social burden they are.

How about the kid who refuses to leave the nest? The one who wants to live his life in your basement, playing video games and eating all of your food? Throw him in one of these and literally haul his @ss to college.

Your glandularly challenged child starting to sulk and whine while you’re running errands? Strap them on.

Have an aging parent with a bad hip you’d like to take hiking? Wear them like a backpack.

The possibilities are endless.

Now just so you know, this contraption does your butt no favors. It will give you a king-sized wedgie and show your posterior in its worst light, like you have the most aggressive pair of granny panties covering the lumpiest rear in the universe. Believe me, some of the shots we took from a less fortunate angle will be burned. More than once. However, given your level of injury and/or laziness, you may not care. If you’re still concerned with how your butt looks and where your thong has relocated then you probably don’t need this.

Please note that this is not a paid endorsement. Hubs voluntarily buys this kind of bad@assery without any sort of incentive and nobody is going to pay me to write an inane blog post about this kind of equipment. I just genuinely get excited about Hubs’s tools.

Also, and even more importantly, please don’t assume that my lighthearted take on this equipment is in any way indicative of a lack of respect toward the men and women who serve our country at home and abroad. Nor am I insensitive to the grave injuries suffered by many of those same individuals. That couldn’t be further from the truth. I’m just prone to silliness.