There has been a lot of media focus of late on the zombie apocalypse. They’re in the news. They have their own books and movies. It’s only a matter of time before a zombie has a star on the walk of fame. I understand it. Naked face eaters are sexy.

The following all happened in one day in the space of an hour, a sure sign that disaster is upon us. I present these events to you with the advice that you take them seriously and start working on your family bunkers.

Last week on September 11th I felt strangely sad and full of foreboding but I couldn’t figure out why. The date didn’t occur to me until I logged on to Twitter and saw the Arby’s retweet “May we never forget #9/11” on my feed. That’s right, motherf***ing Arby’s, the makers of the roast beef sandwich (which, by the way, I ate by the ton in the fifth grade when my mom was sick in the hospital) remembered 9/11 but I did not.

Keep in mind that on the day of the original tragedy Hubs and I were living just outside of Boston (where two of the flights originated) and that Hubs is a cop and a marine with a background in anti-terrorism. I’ve seen more footage of the attack and terrorist attacks in general than your average housewife and I hear about the subject. Every. Day. Whether I want to or not. September 11th is a big freaking deal in our house. And yet a fast food restaurant had to take the time between batches of curly fries to remind me of the day’s significance via Twitter.

It’s official, Paris Hilton and I get our news from the same source. Yay. I’m so hot right now.

“Terrorism makes me so sad. Like flying coach. Not a coach bag. But coach in an airplane. With the poor people.” (image via dreamstime)

A short time later I heard someone use the word “ludicrous” in a sentence. The sentence didn’t make sense to me because I automatically assumed they were referring to the hip hop artist Ludacris. It took me a disturbing amount of time before I realized that they were using the actual word “ludicrous” as it was originally intended. Sure I have major street cred because I know the coolest hip hop artists, but I’ve forgotten the original meaning of words and that is bad. Not bad as in cool, but bad as in…bad. Word.

Not ten minutes later, I heard on the radio that though most of the television stations had observed a moment of silence in remembrance of the victims of 9/11, NBC chose instead to run an interview with Kris Jenner regarding her boob job. Because that’s important. The boobs of a reality television mother. I’m sure that NBC was worried the Kardashians might suffer from media under-exposure. And they just wanted to continue the reign of excellence they enjoyed during their coverage of the Olympics.

Remember the promo for the new comedy Animal Practice that featured a monkey doing gymnastics, which they ran right after discussing gold medal winner Gabby Douglas? It’s hard to match those standards every day. You’ve got to throw down with some Kardashian mammaries during a 9/11 memorial to make that happen. 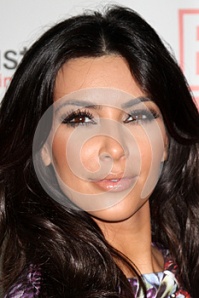 “Don’t forget that my @ss was on CNN.” (image via dreamstime)

Come to think of it, maybe NBC just missed the Arby’s tweet on their Twitter feed and forgot what day it was. Or maybe I’m secretly the president of NBC. I should give myself a raise and then fire myself, but with a nice severance package to tide me over until I get hired by another classy station…like MTV…or at least so I have enough money to stockpile water and toilet paper before I completely lose all brain function and forget what those items are and then end up thirsty and dirty-@ssed during the intellectual apocalypse when we all become cannibalistic and start eating Kardashians…

Judging by my sentence structure it may already be happening.

I call dibs on Kim!

“Actually in the intellectual apocalypse, I will dine on that perfect b!tch.” (image via dreamstime)