A couple of weeks ago, on the way to a parole search, Hubs was traveling in the lead car of a law enforcement convoy when he saw a fire on the median between the freeway and the main adjacent boulevard. A pile of tires had been set ablaze, the kind of fire that often signals the designation of a body dump (homicidal maniacs rarely care about their carbon foot print). At least that’s what Hubs was thinking in the split second between seeing the fire and yanking his car over.

Hubs leaped from the car, grabbed a fire extinguisher, sprinted to the fire and went to work. He ultimately emptied two fire extinguishers to douse the flames. After seeing no body in the charred remains, Hubs turned to take the empty fire extinguishers back to the car.  At this point some of the other team members were just getting out of their cars.

In the eloquent words of the Probation Officer, “Dude!” Thirteen years later and I still find myself stunned and impressed (or occasionally appalled) by various things Hubs does.

Hubs shared this story with me, as he often tells me about his day at the office (later on he had a parolee at gunpoint in a bathtub, but that’s another story) and he said that the team members who were slow to respond were probably just out of the OODA Loop.

Who da loop, you ask?

He had to explain that one to me too. Apparently it’s a concept developed by military strategist and USAF colonel, John Boyd. It stands for Observe, Orient, Decide, Act. It was used in the military to gain the upper hand over an opponent. The quicker one can process this cycle, the more likely one is to gain the advantage over a situation or opponent.

John Boyd aka The Ghetto Colonel, Forty Second Boyd, Genghis John, The Mad Major. He was not into smiling. (image via Wikipedia)

Anyone who has spent any amount of time with Hubs wouldn’t be surprised to hear him describe this philosophy. It’s how he lives his life. For better or worse, Hubs will act quickly. It makes him extremely good in a crisis and sometimes destructive in the home. You don’t want someone using the OODA Loop in your home if you own a lot of breakables, which is why you’ll hardly ever see a curio cabinet full of Precious Moments figurines on a military carrier. 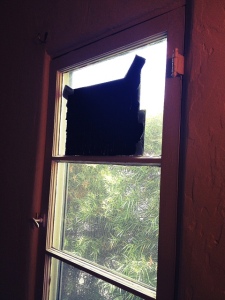 This window was an OODA Loop victim during a yellow jacket incident. 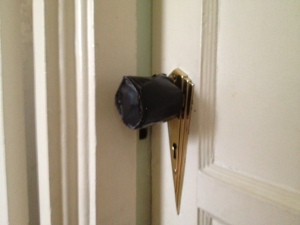 A glass doorknob OODA Loop victim from a “Daddy I’m stuck in my room” incident. Notice the judicious use of duct tape in both cases.

Some shiznit could get broken, there may be some colorful language involved, somebody might even get their feelings hurt, but Hubs will leap into action in a swift and dramatic fashion, while the rest of us say, “Dude!” And then he’ll duct tape the carnage together later. That’s just how he rolls. With a siren.

It is impressive, but if you think about it, mothers use the OODA Loop all the time. Sure it usually doesn’t involve a freeway fire or a gun fight and we try our best not to break household items, but we regularly face our own sort of combat. For instance…

You walk into your two-year old daughter’s room, after her “nap” (otherwise known as the hour she plays in her crib to give Mommy a much needed break) to get her out of bed before the nice man from Craig’s List comes to buy your sofa and discover that your sweet cherub has gone Picasso with the contents of her diaper.

Except your daughter’s painting will commemorate a bombing in her bedroom instead of Spain. (image via Wikipedia)

You Observe the carnage: you might say something colorful that you hope your child won’t repeat later.

You Orient yourself: poo on the walls, crib, stuffed animals, ceiling fan (now that is impressive) and daughter, husband entering room and exclaiming more colorful language, bathroom directly behind you, front door through which you Craig’s List purchaser will arrive in ten minutes, behind you and to the right.

You Decide: husband will take poo-coated daughter to the tub. You will grab a trash bag, Clorox wipes, paper towels, rubber gloves, a vacation in Bermuda (No! Now is not the time for vacation plans! Focus!). You will stay locked in the offending room for as long as it takes and husband will handle the sale of sofa and disoriented daughter.

You Act: scrubbing poo and salvaging toys for the next hour.

You are one bad@ss mama. John Boyd and Hubs salute you with an emphatic “Dude!” Now go out and get yourself that camouflage diaper bag. But shower first because you smell like poo and Clorox.