Yesterday was a banner day here in the Fathead household. My son, who until now has steadfastly held to his vow to only pee sitting down on his very own potty seat in his very own home, peed on a foreign potty. Not only that but he did it standing up. And without any coercion or anti-anxiety drugs.

There we were at a park we’ve never frequented in a questionable part of town when Conor decided that he needed to use the bathroom. Now I brought along a pull up for just this possibility because we have loads of experience with potty meltdowns–refusals to use a potty or bush, cries to go home, a full on meltdown followed by the inevitable wet pants, but Conor decided that he wanted to see the bathroom there at the park.

Each toilet was contained in a separate tiny, dark room, ostensibly to minimize sexual attacks and maximize germ distribution. The ambience reminded me of the first Saw movie and upon stepping inside my life immediately flashed before my eyes, but Conor stepped right up to that nasty, unflushed metal toilet, dropped his pants, leaned against the germ-infested surface and peed right inside. He had to wait a minute for the biological magic to happen and for a moment I thought that he had contaminated himself and would still end up with wet pants, but he did it. Then I let him flush with his foot because I’m pretty sure that his hand would have instantly dropped off from fast-acting necrotizing fascitis had he touched the button with his fingers and we were instantly encased in a microscopic mist of germs and fecal matter while I desperately tried to free us from our toilet tomb and find the nearest bucket of bleach. Yay, Conor! You did it!

Excuse me, sir, could you hurry up and saw off your foot? My son has to pee. (image via haro-online)

Did I mention that I have a teeny tiny hang up about children in dirty public bathrooms? Just a little one. Hardly worth mentioning, really. But I might go a little bit Howard Hughes when confronted with a questionable loo.

However, this was momentous and let’s be frank here, I’m desperate. Desperate to run errands or visit friends without a pull up. Desperate not to have to worry that said pull up might not last the whole visit. Desperate to avoid more phone calls from grandparents and the like asking what to do about Conor’s mental breakdown and refusal to go potty anywhere but home. Desperate to find an incentive that works, so that he can go on to the next year of preschool and eventually college without an adult diaper. Desperate enough to let him go pee anywhere this side of a genocidal body dump. D-E-S-P-E-R-A-T-E.

So you best believe I muttered words of encouragement through my gritted teeth and tried my best to go to my happy place (a place where everyone is potty trained and surfaces are well cleaned, by the way) while Conor and I stood in that nuclear waste dump of a bathroom. I didn’t throw up in my mouth or do the heebie jeebie dance when we exited either. We calmly washed our hands. Twice. And then we went and got the big boy a Happy Meal. 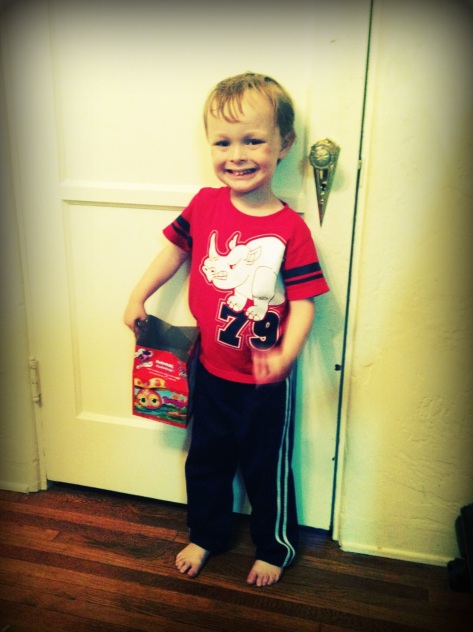 A proud boy with his happy meal

I will swab him down with disinfectant and burn his clothes later after my bleach bath.

Not a bleach bath!

Oh and did I mention that he also let a little girl go ahead of him on the slide, saying “Ladies before genamen?”  Hubs and I couldn’t be prouder of Conor if he speed assembled an M16. Well I guess I should only speak for myself there. The speed assembly would probably bring Hubs to tears. My standards are lower and less sanitary.

13 thoughts on “A Banner Day In A Public Loo”